An Iranian Soccer Fan’s Dream Comes True Without Her 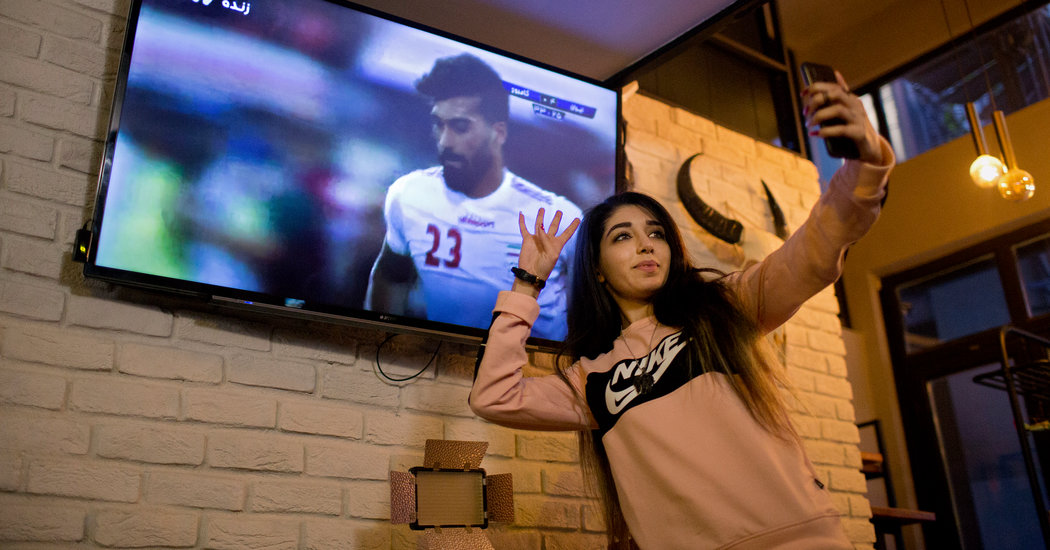 ISTANBUL — Zeinab Sahafi didn’t want to be an activist.

All she ever wanted to be, she said, was a regular fan, another of the millions of soccer obsessives around the world who every week step into stadiums to scream and shout in support of their teams for 90 minutes, and then return and do it all over again at the next game.

Only Sahafi, 23, is Iranian, and a woman, and that has changed everything. To pursue her passion over the last decade she has dressed up first as a boy and later as a bearded man to attend games. She has been arrested and handcuffed and detained in jail, all because since 1981 Iran has barred women from attending soccer matches.

So when the ban was finally lifted — though only partially — on Thursday for a World Cup qualifier between Iran and Cambodia, it would have been natural for Sahafi to be among the 4,000 women who eagerly bought tickets and entered the Azadi stadium, the cavernous arena in western Tehran where the national team plays its home games.

Except she was not there. Instead, Sahafi watched the match alone in a mostly empty Iranian cafe in Istanbul, where she is in a temporary self-exile. It was from there that she reveled in the rare access granted to thousands of other Iranian woman, where she cheered each of Iran’s 14 goals, where she was moved to tears at times by the sheer emotional power of the day.

“I’m so disappointed I cannot be there, but at the same time I’m happy other women can go,” Sahafi said. “It’s like planting a very small tree, watching it grow and finally seeing that there are fruits. It’s just that other people are now eating the fruits.”

It all seemed a cruel twist of timing. After slipping into matches for a decade, Sahafi fled her homeland in August, a 30-hour journey by road that began when she received word that the Iranian authorities were seeking to detain her. Part of the reason, she was told, were her efforts in recent years advising other frustrated young girls and women on how to evade the ban and attend games.

For years Sahafi has used her Instagram account to post videos and pictures of herself inside stadiums and to — perhaps most frustratingly for the authorities — give master classes in passing as a man to get into stadiums.

A tattooist in her home city Ahvaz, Sahafi started the journey that has led to exile when she was 13. When her favorite team, Persepolis, came to her hometown, about 800 kilometers (500 miles) southwest of Tehran, an uncle helped her dress as a boy and took her to the stadium. She made it inside, but shortly after halftime her emotions got the better of her and she let out a cry that drew the attention of stewards. They told her to leave. A stadium, they said, was no place for a young girl. But Sahafi was hooked.

She waited until she was 16 before trying again, one of dozens of such attempts. Sometimes she was able to fool the guards, and sometimes she was not. Willowy and with a mane of long black hair, Sahafi experimented with different looks: a 5 o’clock shadow created with black makeup, or bushy beards made by cutting her own hair and sticking it to her cheeks with glue. (That was itchy, she says now.) As she got older, her disguises evolved to include bandages across her chest, pulled so tight, she said, that it was difficult to breathe.

Once inside a stadium, she would post her successes to Instagram. Her audience grew — her account now has more than 140,000 followers — but it also made her a target of the police.

Several times Sahafi has been caught trying to enter stadiums, detained overnight and only released after signing documents attesting that she would not try again. “But I always do. I’m stubborn,” she said.

Years ago, after waiting hours in a team hotel, she told her hero, the since-retired player Ali Karimi, that she would watch him play in a stadium. He told her not to come, warning that she would be arrested. Sahafi ignored him. “I didn’t” stay away, she said, “and kept doing it again and again.” Today, she has Karimi’s name tattooed on her left wrist.

Two months into her exile in Turkey, Sahafi has slowly adapted to her new circumstances. But even for this freewheeling young woman, who has the carefree air of a teenager and draws crowds on Istanbul’s streets when she dances with buskers, the reality of her situation can be overwhelming, particularly when family members call. So swift was her exit from Iran this summer, she said, that she didn’t have a chance to say goodbye to her father. She spends her days watching videos of her seven-month-old brother, Shahin, on her cellphone. When her mother called before the world qualifier kickoff on Thursday, it was with a message: I wish you were there.

Instead, she was alone as kickoff approached, rising from her seat to mouth the words to Iran’s national anthem, and then settling back down to soak in every moment on a television that only she was watching. Within five minutes, Iran had scored the first of what would 14 goals in its thrashing of Cambodia. Even as the game got out of hand, Sahafi celebrated each goal as if it was a crucial marker on the road to a major victory, her joyful yelps matched only by the occasional squawk of the cafe’s African gray parrot.

Her future is unclear. Iranians are allowed to enter Turkey for a maximum of three months before they must leave, and Sahafi has less than three weeks before her window closes.

She said FIFA could do more for Iranian women like her — “If they put more pressure on, I wouldn’t he here” — but she also acknowledged that she faces arrest if she returns to Iran.

In the meantime, Sahafi will await her fate.

“I just want to have a life without stress,” she said. “And maybe watch a little bit of football.”