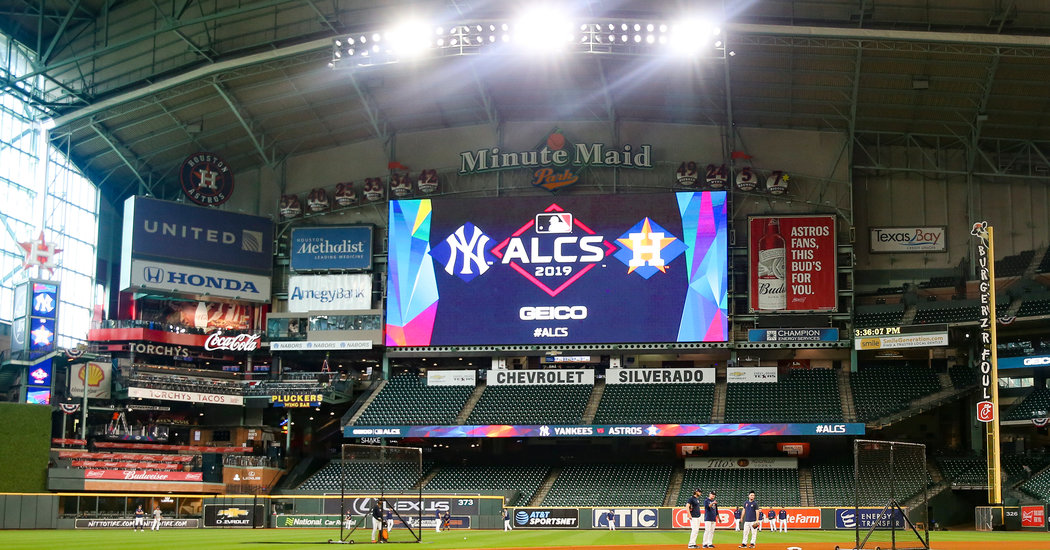 The Yankees took a 1-0 lead as Gleyber Torres jumped on a hanging slider and drove it to the gap in left-center, scoring D.J. LeMahieu from second base.

LeMahieu had reached on a ground ball single and went to second on a strange wild pitch by Zack Greinke. The pitch was supposed to be on the outside corner but shot in under Aaron Judge’s arm and past Robinson Chironos.

But Greinke did well to strand Torres at second with only one out. He struck out Edwin Encarnacion with a vicious slider that was never really in the strike zone, and then got Stanton to hit a fly ball to center field.

3rd Inning: The infielders have made some strong plays.

While Masahiro Tanaka and Zack Greinke both look good — each has allowed one hit while facing the minimum number of batters through three innings — the slight edge goes to Tanaka because the Yankees have hit more balls hard.

Two of their outs were sizzling line drives. The Astros got their first hit off Tanaka and it was by the rookie, Kyle Tucker, who had never faced the Japanese right-hander before. Tucker ripped a line drive into right field with one out, but it was erased when Tanaka induced a double-play ball from Robinson Chirinos.

Alex Bregman made the play of the game so far, jumping to snare a sizzling line drive by Gio Urshela. Bregman is not tall for a third baseman — he’s listed at 6 feet, although that might be an exaggeration. But Bregman has been playing deeper at the hot corner this year than he did last year, and that might have been the difference in that play. If the ball got past him, it was likely a double for Urshela.

2nd Inning: The Yankees get the first hit but the pitchers stay in control.

The Yankees got the first hit on a one-out infield single by Giancarlo Stanton, but Greinke got out of it after Brett Gardner hit into a double play. It was a good at-bat by Gardner, who patiently worked the count full, perhaps hoping for a fastball to hit hard.

He got a changeup instead, but he squared it up and lined it down the first base line. Unfortunately for Gardner, he hit the ball directly at Astros first baseman Yuli Gurriel, who stepped on the bag to double off Stanton.

It’s about the pitching here, so far.

1st Inning: Both starters breeze through the top of each lineup.

Both pitchers looked good in the first inning as neither team got a hit.

Zack Greinke almost spent more time on the mound in a 1-2-3 inning than he did in his obligatory news conference on Friday. Greinke basically refused to engage in any of the questions, giving short, boilerplate answers to questions about what it means to open the series and what would it be like to pitch against the Yankees lineup.

His response to a question about his long layoff in the A.L.D.S. affected him was three words: “I don’t know.” So far, so good in this game.

Masahiro Tanaka looked very sharp, inducing two ground balls and pop up from Jose Altuve. Gleyber Torres fell down while fielding Michael Brantley’s grounder, but still made the throw to first base.

The atmosphere in Minute Maid Park is good, but it seems a tick less intense than in Game 5 of the A.L.D.S. More on that later.

Zack Greinke has pitched to this umpire before.

The home plate umpire for Game 1 is Bill Welke. According to Baseball Reference, Greinke has started nine regular season games with Welke calling balls and strikes.

The A.L.C.S. features two of baseball’s most dominant teams.

As far back as May, when it became clear that the Yankees and the Houston Astros were the two best teams in the American League, anything less than an epic encounter for a World Series berth would have been a disappointment. Adding to the enticing backstory is that it is also a rematch of the 2017 A.L.C.S., which the Astros won by taking Game 7 at home.

But these Yankees are improved and more experienced than the team from two years ago. They won 103 games in the regular season and came into this best-of-seven series riding a wave of momentum after easily eliminating the Minnesota Twins in a three-game sweep. The Astros, winners of 107 games — the most in baseball — had a harder time in the division series, needing five games to dispatch the Tampa Bay Rays.

Houston used Gerrit Cole, its best pitcher, in the clinching win against Tampa Bay, so he will not be available until Game 3 of the A.L.C.S. But Cole likely would be available to start if there is a decisive Game 7.

That is no small factor, considering that Cole has been unbeatable for more than four months during one of the most remarkable runs in baseball history. His last loss was on May 22, and he has gone 18-0 since then, setting a major league record by passing Roy Face (1959) and Carl Hubbell (1936). Over that stretch, his E.R.A. is 1.66 and the Astros are 22-2 during his starts, including his two wins in the postseason. Cole struck out 25 batters in those two games, setting a record for most strikeouts in a division series.

But over all, it is difficult to say where the advantage lies with two teams that are both so good.

Didi Gregorius is batting ninth for the first time this year.

Yankees Manager Aaron Boone said he likes the idea of Gregorius being a kind of second leadoff hitter, but he was also conscious of dividing up the left-handed hitters. Gregorius, who ended the season in a slump, broke out in the division series against the Twins, hitting a grand slam in Game 2, and he went 4 for 7 in the last two games. But he is 2 for 11 lifetime against Greinke, which may have been factor, too.

The Astros are going with 22-year-old rookie Kyle Tucker in right field instead of Josh Reddick. Tucker, who started Game 2 of the division series win over the Tampa Bay Rays, hit 32 home runs and stole 30 bases for Houston’s Round Rock Class AAA affiliate before being called up in September. Tucker has hit four home runs and six doubles in 22 major league games.

“He’s had an unbelievable year offensively,” Astros third baseman Alex Bregman said before the game. “He’s brought a lot of energy, and I think he’s going to do that tonight.”

Here’s a look at the full lineups:

The Astros have a significant home-field advantage.

Houston won 60 games at Minute Maid Park, the most in baseball and 14 more games than it won in its stadium last year during the regular season.

Last year, the Astros lost all three home games to the Boston Red Sox in the A.L.C.S. All three of their playoff wins this year have come at home.

“Did you hear the crowd today?” Tampa Bay Rays catcher Travis d’Arnaud said after Game 5 of the division series. “It’s explosive. Even from announcing their lineups and when every one of their guys took the field, the crowd exploded every time. They won so many games here and they earned the right to home-field advantage and I’m sure the fans appreciate that, too, and will cheer even louder.”

The Yankees have reordered their starters for this series.

Tanaka pitched Game 2 of the division series, but Boone flipped him and James Paxton for the A.L.C.S. Tanaka made four starts at Minute Maid Park during the regular season, going 0-1 with a 5.73 E.R.A. But he has experience starting here during the playoffs. In 2017, he started Game 1 of the A.L.C.S. at Minute Maid Park and pitched well through six innings, allowing only four hits and two runs (although Houston won that game, 2-1). That same series, he was brilliant at Yankee Stadium in Game 5, throwing seven scoreless innings with only three hits in a 5-0 Yankees win.

Trading for Greinke has worked well for Houston.

In his last start, Greinke was rocked in Game 3 of the division series against the Rays, giving up six runs in less than four innings in Tampa. In 12 career starts, half of them with the Los Angeles Dodgers, Greinke is 2-5 with a 4.58 E.R.A.

Carlos Beltran played for the Astros in 2017. Now he works for the Yankees.

Could Beltran, the former Astros player who now works for the Yankees as a special adviser, be an X-factor? He was a teammate of Astros Manager A.J. Hinch in Kansas City and Hinch knows that Beltran will give the Yankees as much information as he can recall from his time with Houston in 2017. Beltran is also an expert sign stealer — using crafty (while still legal) methods.

Kenya: Mudavadi Kicks Off Diaspora Tour in the US to Popularize His 2022 Bid

Alberto Salazar Has Always Lived on the Edge