ODM leader Raila Odinga is quietly grooming Kakamega governor Wycliffe Oparanya to take over the ‘reigns’ of Western region’s political supremacy from ANC leader Musalia Mudavadi ahead of 2022 transition polls, Weekly Citizen has established.
Long resigned to life without his erstwhile ally in the moribund Nasa coalition in the wake of a multi-faceted fallout partly attributable to the Sh4 billion political party payout to the March 9 handshake, the Sh4 billion payout ODM from the Political Parties Fund and the upcoming Kibra by-election, Raila has motioned Oparanya to in earnest set off on the journey on the road to the region’s kingpin. 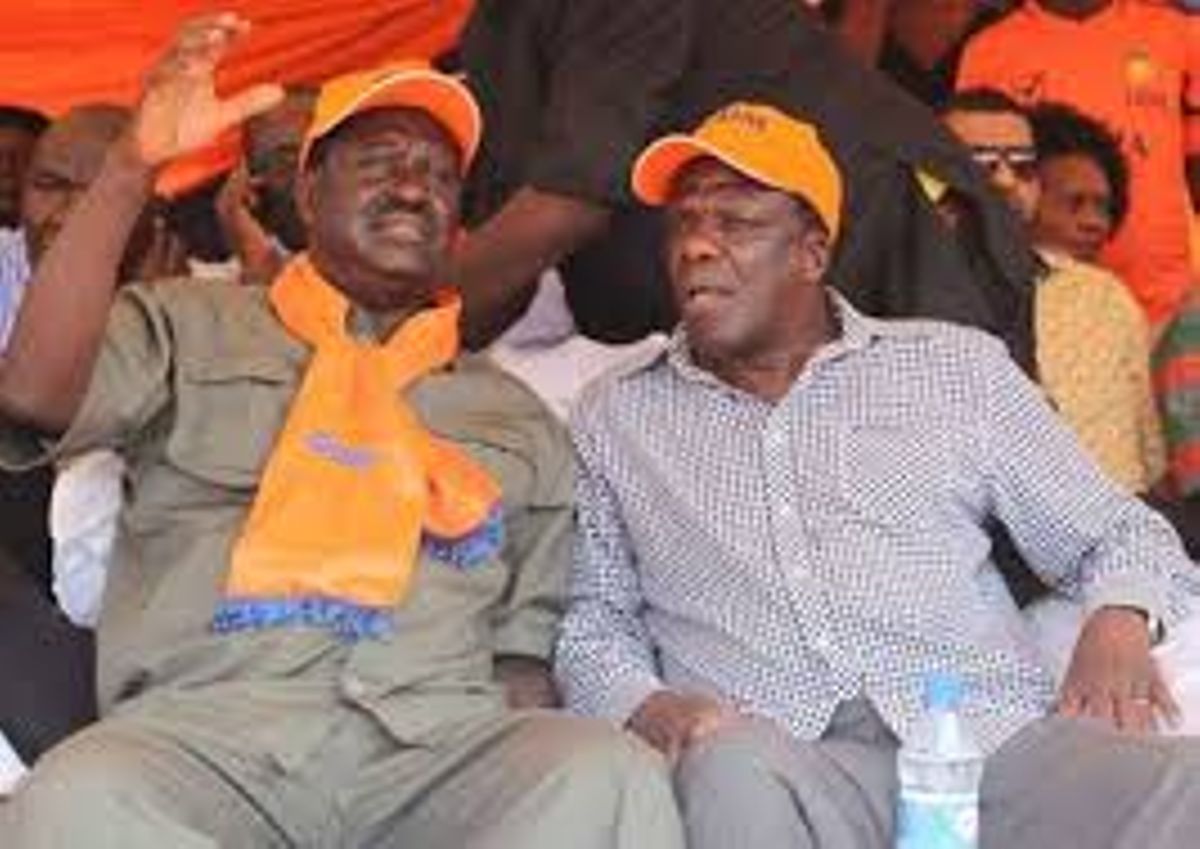 Essentially, the former prime minister still has his sights trained on the Luhya vote basket, albeit without clear indication of Luhya vote destination. With Mudavadi apparently stopping at nothing short of the State House tenancy in the 2022 succession race, the die seems to be cast here.
Much as he most likely could be privy to the contents of the much waited Building Bridges Initiative report that is widely expected to usher in a raft of constitutional changes that would culminate into a new order in the country’s political dispensation, Raila is playing his cards close to the chest, waiting to pounce at the right hour for the ideal position.
The opposition leader has not concealed his preference for a parliamentary system of governance to be typified by the creation of an executive prime minister position, for a long time now Raila’s pet subject.
With this in mind, the former PM may opt to go for the prime minister position while fronting someone else for the presidential seat. And with Mudavadi seeming to have chosen a solo path devoid of political alliances, Raila hopes to craft a fresh alliance roping in Mudavadi’s replacement from Western, Oparanya to be more precise.
In the run up to the August 2017 general election, influential Central Organisation of Trade Unions secretary-general Francis Atwoli, sponsored a vote for the Luhya community spokesperson that eventually saw Mudavadi crowned at Bukhungu Stadium in Kakamega, piping Oparanya and Bungoma Senator and Ford Kenya leader Moses Wetang’ula to the second and third positions respectively. 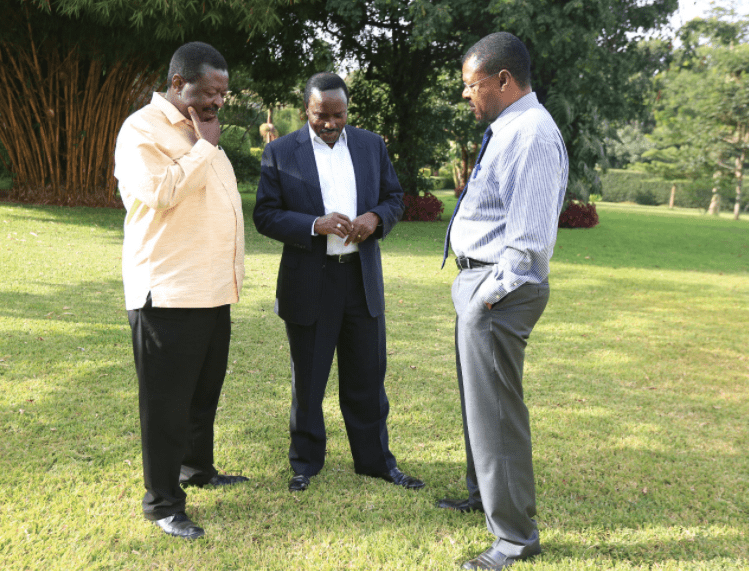 From left: Muadavadi, Kalonzo and Wetangula

Together with Wetang’ula, the ANC chief would go on to form the National Super Alliance coalition that also roped in Raila’s ODM and Kalonzo Musyoka’s Wiper party. Raila was eventually selected to be Nasa’s presidential flagbearer, with Kalonzo as running mate, only to lose to Jubilee’s Uhuru Kenyatta in the controversial 2017 elections.
Recently, Weekly Citizen exclusively reported that Raila was contemplating a new lineup on the road to 2022, with powerful Interior CS Fred Matiang’i, governors Ali Hassan Joho, Mombasa, Anne Waiguru, Kirinyaga, Alex Tolgos, Elgeyo Markwet, Jackson Mandago, Uasin Gishu, Baringo senator Gideon Moi, Cotu boss Francis Atwoli, Eldoret tycoon David Langat and the influential Kenyatta family sought to fortify his 2022 plans.
Atwoli and Mudavadi have since fallen out in the aftermath of the high profile mock swearing-in of Raila at Uhuru Park as “people’s president”. Atwoli has variously cited Mudavadi’s ‘cowardice’ in reference to Nasa co-principals’ failure to attend Raila’s ‘swearing in’.
With ‘Bukhungu Declaration II’ said to be in the pipeline, it remains to be seen how the outspoken Cotu boss will navigate matters in the wake of the much touted but elusive Luhya unity; a divided house now reeling under the singular shame of failing to forge a common cause in the highly publicised Kibra by-election.
With a soft spot for Raila, Atwoli is likely to throw his weight behind Oparanya, who has also signaled his intention to go for the top seat. The council of governors boss wields substantial influence in Kakamega county and beyond. This perhaps explains Raila’s keenness on him, as Mudavadi goes it solo.
Whereas Mudavadi is fronting former Raila presidential campaign manager Eliud Owallo – a Luo – on the ANC platform, Wetang’ula’s 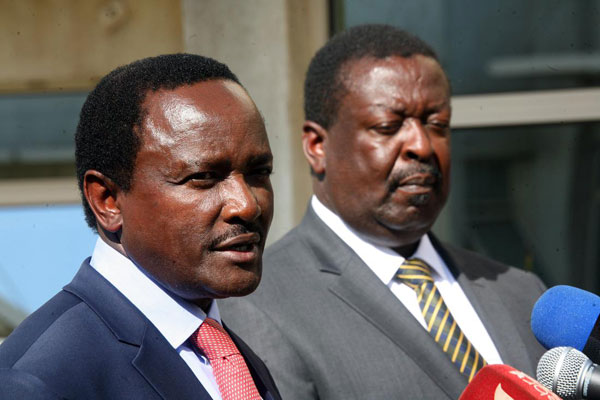 Ford Kenya elected to rally behind Khamisi Butichi on the lion party ticket.
Initially, it was widely expected that ANC and Ford Kenya would unite behind a compromise candidate from the community on either ticket or even as an Independent candidate. The purposed ‘unity’ was seen to be hinged on the misplaced object of teaching Raila a lesson or two. 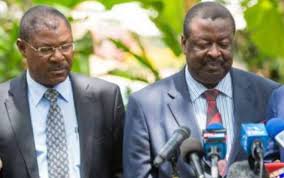 Mudavadi and Wetang’ula perceive themselves as victims of Raila’s domineering demeanor as epitomised by the March 9 2018 handshake with Uhuru that saw them – together with Kalonzo – kept in the dark altogether.
Incidentally, William Ruto was also kept in the dark as the President’s truce with Raila – until then the Big Two’s presumed common enemy – took centre stage at the stare cases of Harambee House.
And in a swipe aimed at Mudavadi and Wetang’ula, Ruto recently taunted the two leaders for failing to unite the community, even offering to help them unite Luhyas. Speaking during the requiem mass for former Kakamega senator Bonni Khalwale’s wife, Adelaide Shikanga, Ruto challenged the community’s political leadership to walk the talk by standing with Jubilee’s MacDonald Mariga in the Kibra by-election.
To the contrary, it was Mudavadi’s ANC MPs who had from the onset salivated at Ruto’s backing of their candidate in the false hope of finishing Raila together. Since the Tangatanga crew’s fielding of Mariga in the by-election, Mudavadi has been on the roll, taking on Ruto left, right and centre.